I’ll never forget where I was at 10 a.m. on Thursday and Friday mornings.

The smart money was wrong.

I heard someone yell “King!” when the health reform case came up on Thursday, and “marriage!” on Friday.

And then I didn’t need SCOTUSblog at all. Both times, there erupted claps, and hoots and hollers, and hugs in the hallway, and tears. So very many happy tears.

On Thursday, those tears flowed right into our conference room, where dozens of us gathered to watch Obama’s speech, champagne in hand. For many of my co-workers, the health reform ruling was a vindication of work that they’ve been doing for years — some for decades. They were relieved that their efforts hadn’t been for naught. I was proud to be among them.

That’s in part because for me, that the Supreme Court upheld health reform brought great personal relief. I’ve been lucky always to have had access to good health care — first under my parents, and then in each job I’ve held. Sometimes the premiums jumped from year to year more than I would have liked, and some of the prescription drug formularly lists frustrated me. But I’ve always been able to see a doctor when I needed to. And when it really counted, I didn’t have to worry about which doctor I could see, or whether I could afford a series of four shots that cost more than $2,500 each and were central to my treatment, or whether my insurance would be dropped because of the pre-existing condition that would forevermore mark my medical file.

I know that I’ve been lucky, and even without health reform, the odds are good that through my career and my husband’s, I’d have had good health care for life. But I also know that good odds aren’t guarantees, and I know, too, that a lot of people can’t say that they’ve been as fortunate — that they have settled for lesser doctors, or cheaper medicines, or gone without treatment altogether. Health reform means for them — and for me, if those odds ever flipped — not having to choose between health care and financial health.

Cancer may always mark my medical file, but it won’t keep me from getting insurance, and it won’t bankrupt me.

Friday’s ruling for marriage equality didn’t affect me as directly, but it brought an even bigger smile to my face. And just when I thought my grin couldn’t get any wider, I read this, Justice Kennedy’s final paragraph:

No union is more profound than marriage, for it embodies the highest ideals of love, fidelity, devotion, sacrifice, and family. In forming a marital union, two people become something greater than once they were. As some of the petitioners in these cases demonstrate, marriage embodies a love that may endure even past death. It would misunderstand these men and women to say they disrespect the idea of marriage. Their plea is that they do respect it, respect it so deeply that they seek to find its fulfillment for themselves. Their hope is not to be condemned to live in loneliness, excluded from one of civilization’s oldest institutions. They ask for equal dignity in the eyes of the law. The Constitution grants them that right.

The judgment of the Court of Appeals for the Sixth Circuit is reversed. It is so ordered.

It is so ordered. And about damn time. (That passage also really made me wish I was going to a wedding anytime soon, just so I could hear those words as an inevitable part of the vows.)

I saw pictures of kids among the huge crowd in front of the Supreme Court on Friday, and I teared up all over again. My kids will grow up in a country where they’ll have health care, and where they, and their friends, and their cousins, will be able to marry whomever they want. It’s not an over-exaggeration to say that the trajectory of their lives, or the lives of the people they love, may have been changed on those two days last week.

And that’s why I was pulled to the Supreme Court yesterday, in the rain, with an infant who hadn’t napped. Because I wanted to be there, with them. I wanted to take a picture to document that we were there. The marriage ruling came on the day that Katie turned eight months old. This will be a part of her history, something I’ll tell her about years from now.

I’m sure she’ll look at me like I’m crazy. “What do you mean, mom, that people couldn’t marry who they wanted to?” she’ll ask. I’ll understand the skeptical look she’ll give me. “I know, sweetheart, can you believe it?” I’ll answer.

With a big smile. (And then I’ll probably say something about “hashtag lovewins” and she’ll really look at me like I’m nuts.) 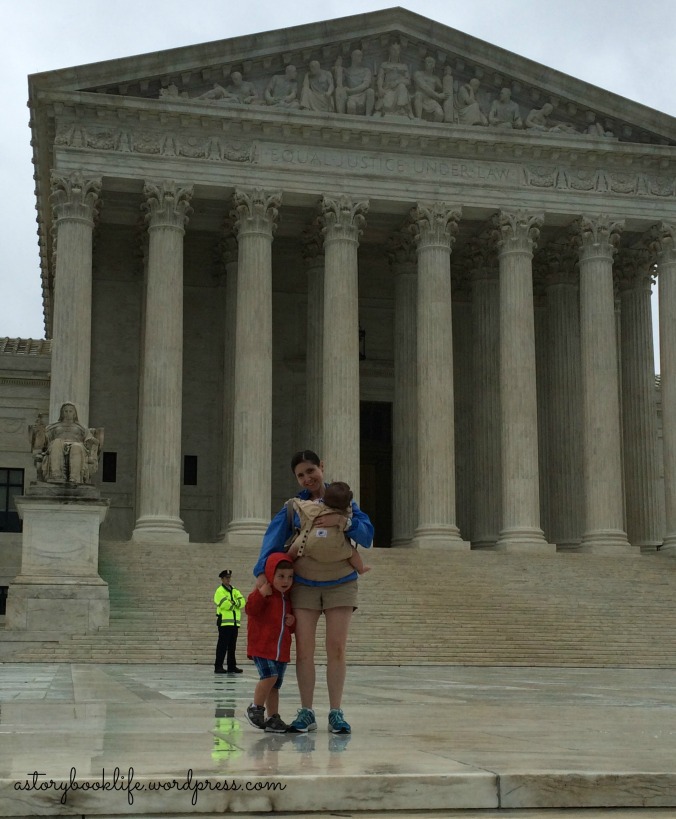 National Journal’s Ron Fournier tweeted Friday, “This week was for the history books. Not just a paragraph. Not a mere chapter. Books will be written about this week.”

I can’t wait to read them.

2 thoughts on “Witness(ish) to History”